Once upon a time there was a mystery writer who went to the police academy. And she learned to shoot a gun, apply handcuffs and defend herself against some very bad guys.

Well, sort of. I suppose boxing a rubber dummy’s ears is a bit different from fighting a real assailant. But that’s just a small detail. After all, I won!

I also learned that handcuffs are trickier to use than they look; there’s a right and wrong way to stick those contraptions on.

How do I know? Well, er, when it was my turn to slap handcuffs onto a volunteer, I attached the right-hand cuff to the suspect’s left hand.

And don’t even ask me what happened when I fired that gun . . . 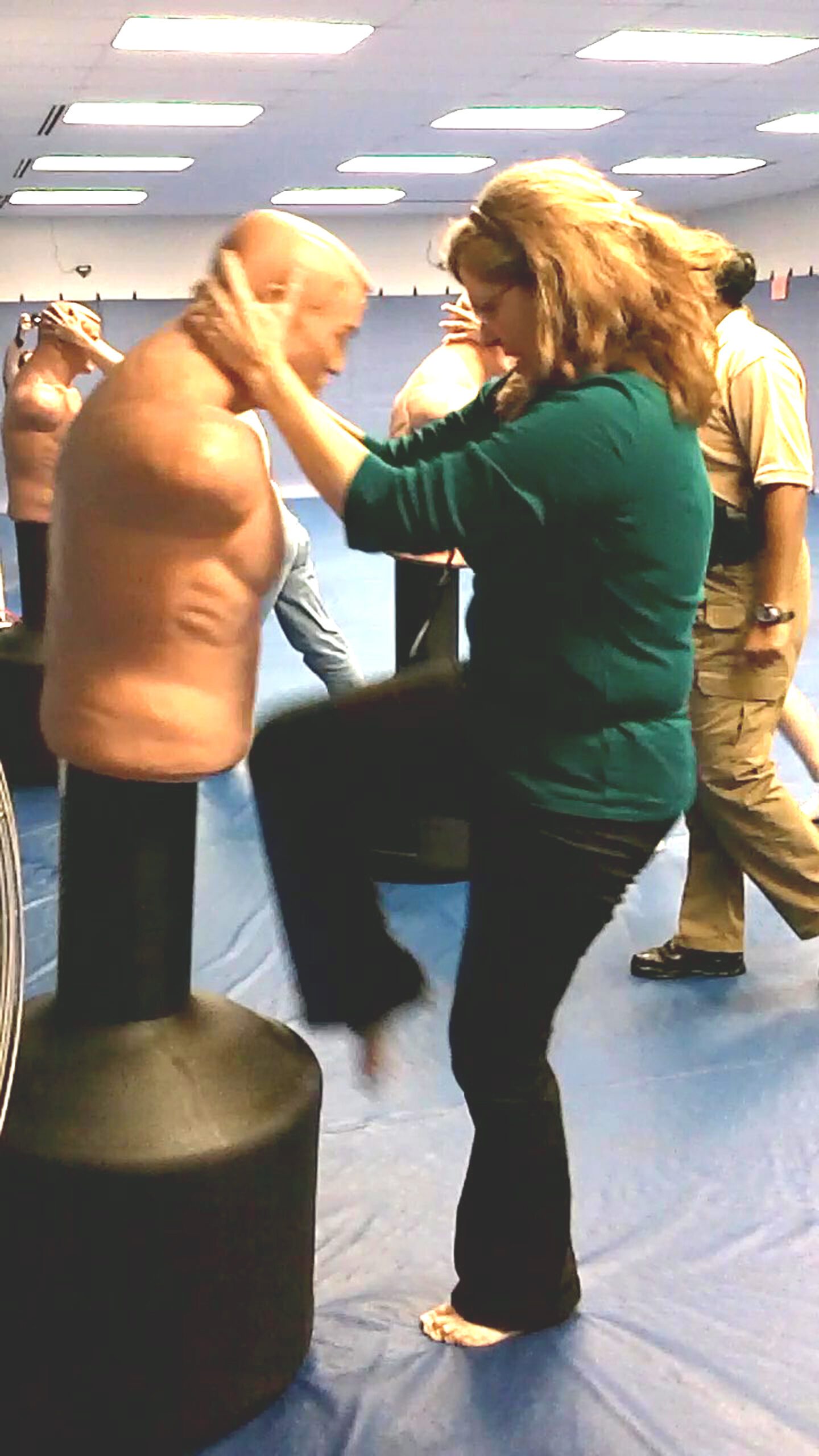 We learned to fight dummies with elbows and knees. . . 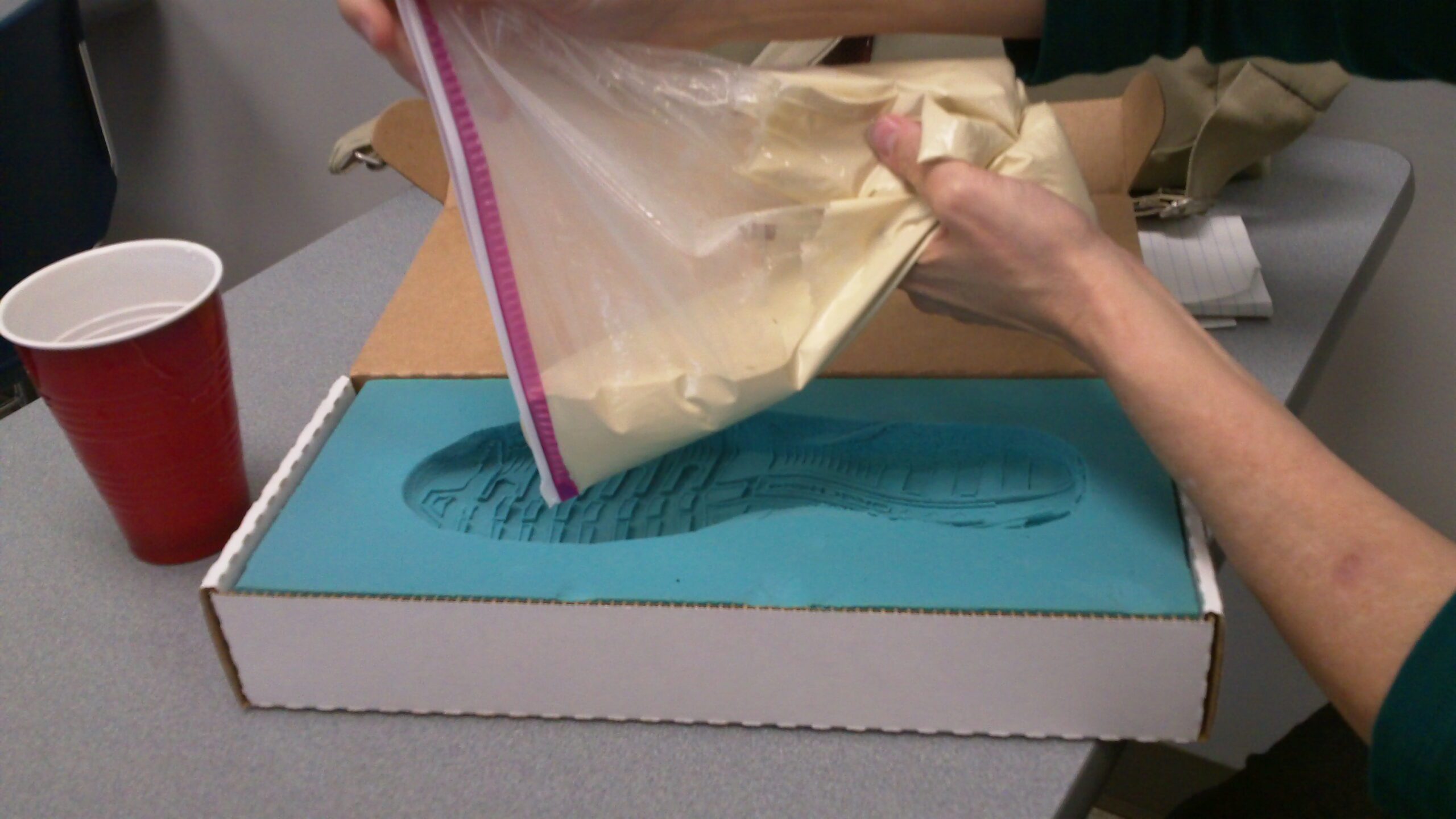 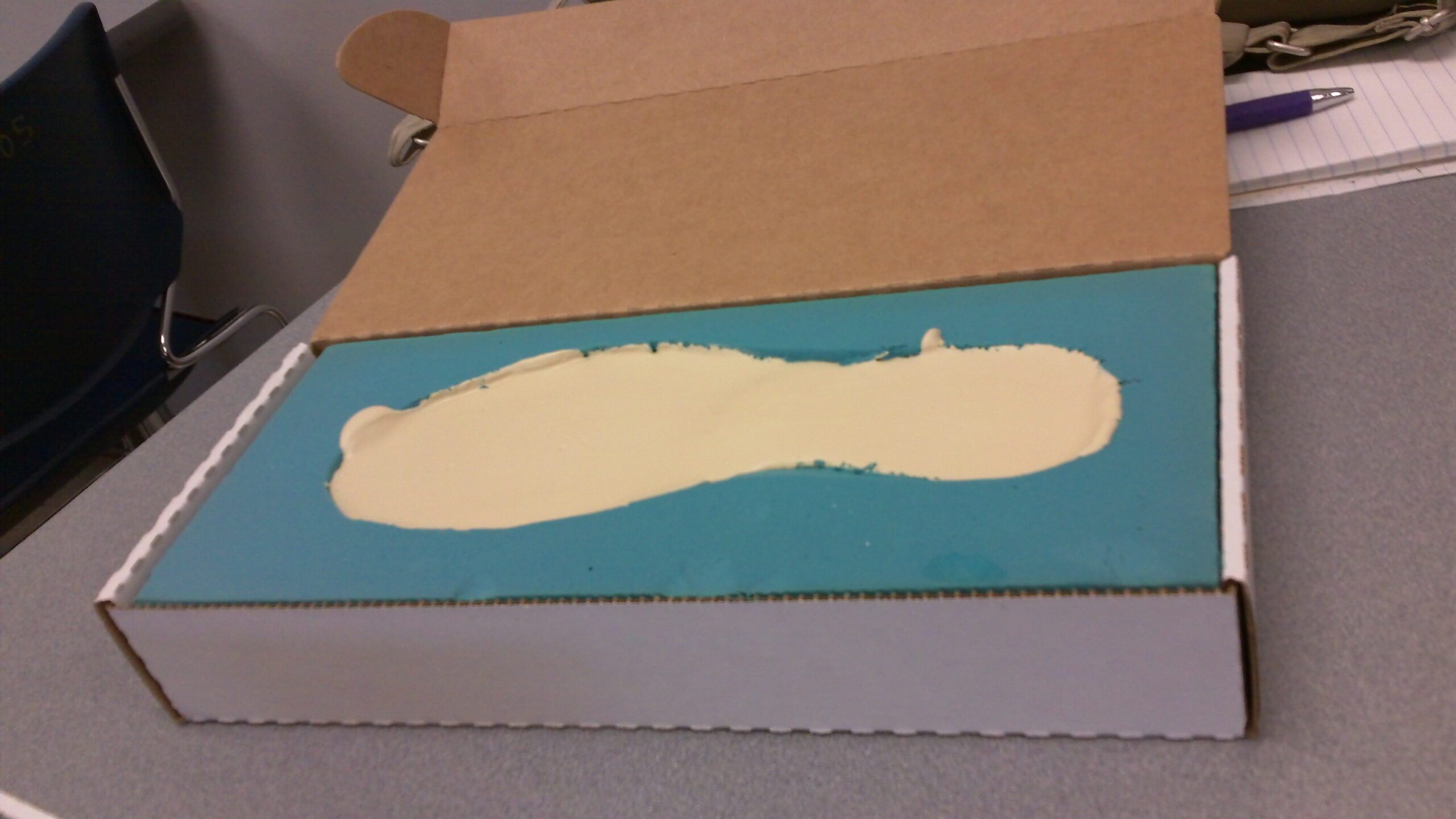 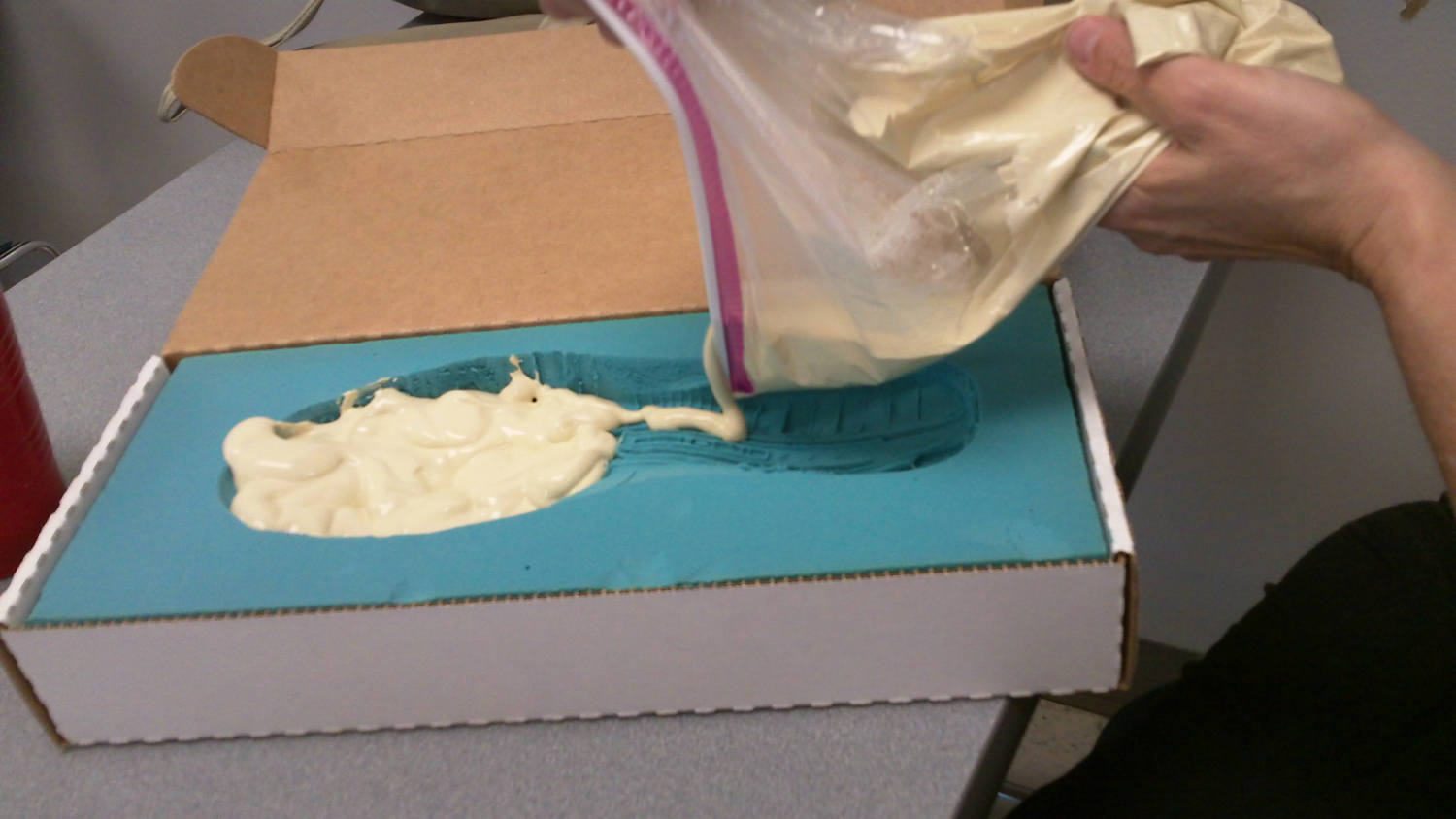 We mixed a special formula and used it to make casts of footprints.

Okay, I guess you can ask since I’m about to give you an inside look at a real, honest-to-goodness police academy.

Many of you have told me that you love the realism you find in my novels. So when a real police academy in North Carolina opened its doors for mystery and thriller writers, I jumped at it. My excuse was that I need to make sure Lieutenant Brockley follows correct police procedures. And you never know when Kim might need to fire a Glock.

Besides, the ads called the weekend “Disney Land for Writers.” Who could resist that?

And then there was the Glock.

As a mystery writer, I knew I needed to overcome my aversion to guns. Heck, some of my childhood heroes – Annie Oakley comes to mind – proved their worth in a man’s world by out-shooting the best gunslingers. I once shot a .22 rifle, but my hands shook so badly that none of the bullets came anywhere near the target. When my husband bought me a small shotgun “for protection,” I refused to touch it.

As for a handgun? Fuhgeddaboudit.

But here I was, at probably the safest place in the world to learn about guns and I was compelled by my profession to embrace the opportunity.

Movies often depict rookie police shooting at human-shaped paper targets or moving through a cardboard city filled with both civilians and bad guys. While these exercises might measure an officer’s shooting accuracy, they don’t prepare people for the psychological backlash of firing a gun at another human being. Accidentally shooting a cardboard kid while trying to take down a cardboard bank robber isn’t going to ruin your day, right? 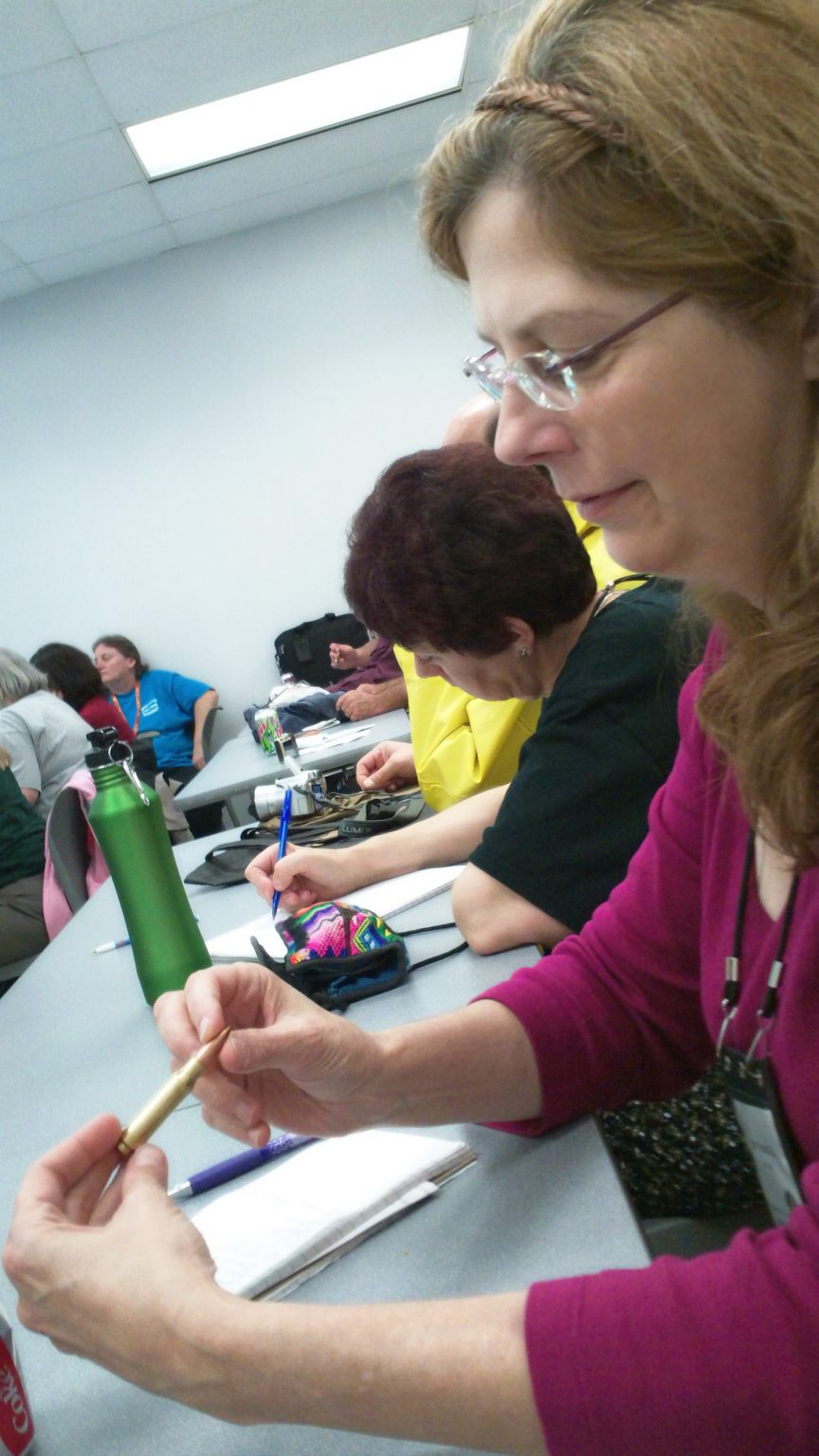 To the left, I’m examining the bullet from a sniper’s rifle. Somehow, I hadn’t expected it to be so large.

FATS is a computer-based training tool so life-like that users actually experience fear, tension and remorse.

Judging by the expressions on the cops’ faces, I suspect they longed to change the writing on our t-shirts from “Writer” to “Ghoul.”

Or so we were told. We were also cautioned that the scenarios would be “intense,” “chilling” and “highly charged.”

The classroom appeared innocent enough. An over-sized movie screen hung on one wall. Six feet away stood waist-high barriers, each about three feet wide. Beyond that, an officer sat in front of a computer and what looked like a movie projector. Off to the side were maybe half a dozen chairs for our gaggle of rookies, er, writers.

At first glance, we might resemble a normal group of people enjoying a typical Saturday work conference. Most of us were dressed in jeans, sneakers and the specially made Writer’s Police Academy t-shirts (with the words “Writer” on the back). We wore glasses and chewed our nails. We women nervously tucked hair behind our ears.

The questions we posed to the unsuspecting cops, however, revealed our true natures. “Can stored blood be used to stage a death?” “What are the symptoms of arsenic poisoning?” “Can you get fingerprints from a mummified corpse?”

Judging by the expressions on the cops’ faces, I suspect they longed to change the writing on our t-shirts from “Writer” to “Ghoul.”

Our FATS instructor explained that the scenarios we’d be enacting were drawn from real-life. We’ll work in pairs and be armed with real Glocks. Instead of firing bullets, however, these Glocks shot lasers.

I perked up. Lasers? Really? Like in Star Wars?

Nope. The lasers were invisible, but they told the computer exactly where the Glock was aimed, how many shots were fired, who fired the shots and where the bullets would have actually landed.

Each team would be given the chance to try a number of different scenarios.

“Who wants to go first,” the instructor asked.

Yeah, you guessed it. My hand flew up.

When I was a child, my mother often warned me that my enthusiasm would get me into trouble. In this case, she was right. By going first, I wouldn’t have the opportunity to learn from others’ mistakes.

Oh, well. I snagged a new friend to join me.

Before starting the simulator, we needed to learn to load and unload our Glocks. Though the guns were shooting not-Star-Wars lasers, the magazines were weighted and ran out of bullets just like real guns. This meant that we would need to periodically stop to reload.

The gun felt huge. When I pushed the magazine into the gun and smacked it with my hand to make it lock, it made a satisfying snap.

When I was a child, my mother often warned me that my enthusiasm would get me into trouble.

“To unload, just push the button,” the instructor said.

I moved my hand. The clip flew out of the Glock and clattered to the floor.

I stooped to pick it up.

“Watch where you point the gun!”

The instructor finally turned to talk to someone else. I got myself sorted out and ready for our first scenario.

The lights went out, sending the room into complete darkness except for the images on the screen: We were looking out the passenger’s window of a moving car.

In this scenario, we’d been called to assist an officer we’d never met. Houses and street signs flew by.

Up ahead, we spotted a police cruiser parked by an open field. The car was empty, its doors ominously open.

We parked behind the cruiser and got out to investigate. We looked inside the empty car, but saw nothing. Turning, we trudged into the field.

We climbed a hill and approached a fenced-in area. Beyond it, I could see a man dressed in black standing over a man lying on the ground. The black-clothed man’s legs were spread, his arms extended, both hands gripping –  Gun!

Even as the word formed in my mind, the gunman shot the man on the ground. My ears rang with the loud explosion.

Suddenly the man pointed the gun at us. A flash from the gun, another clap of noise.

I raised the Glock and pulled the trigger. My partner did the same. Our accuracy – or lack thereof — was revealed when the man turned and ran.

We chased him to a parking lot where a woman was getting out of her car. The gunman snatched her, pulled her in front of him and pointed the gun to her head.

To my utter surprise, he did.

The lights flashed on and I lowered my gun. I was gasping for breath. I turned to my partner. She was also breathing heavily.

We shared a grin and a high-five. After all, we survived. 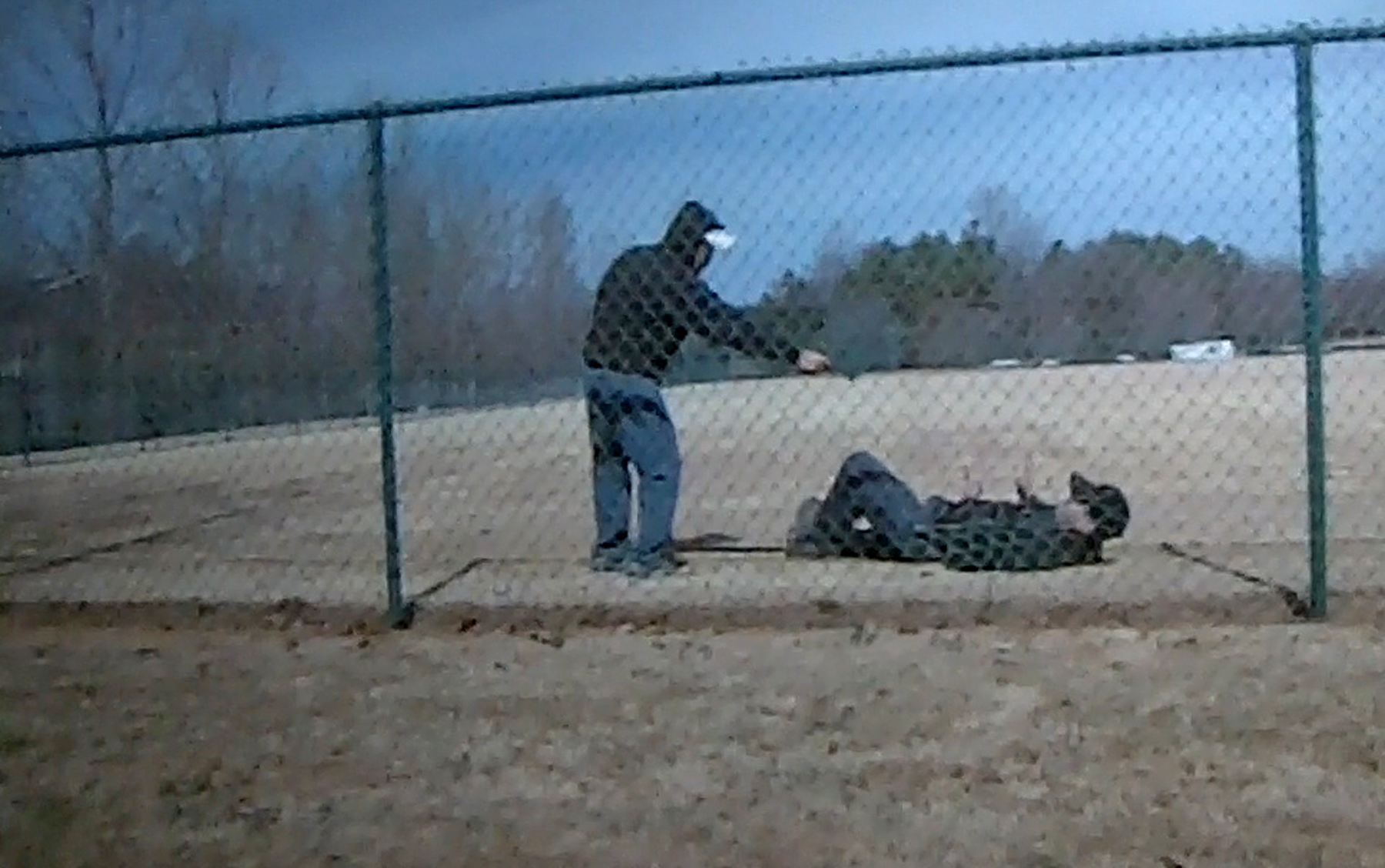 The black-clothed man’s legs were spread, his arms extended, both hands gripping –  Gun! 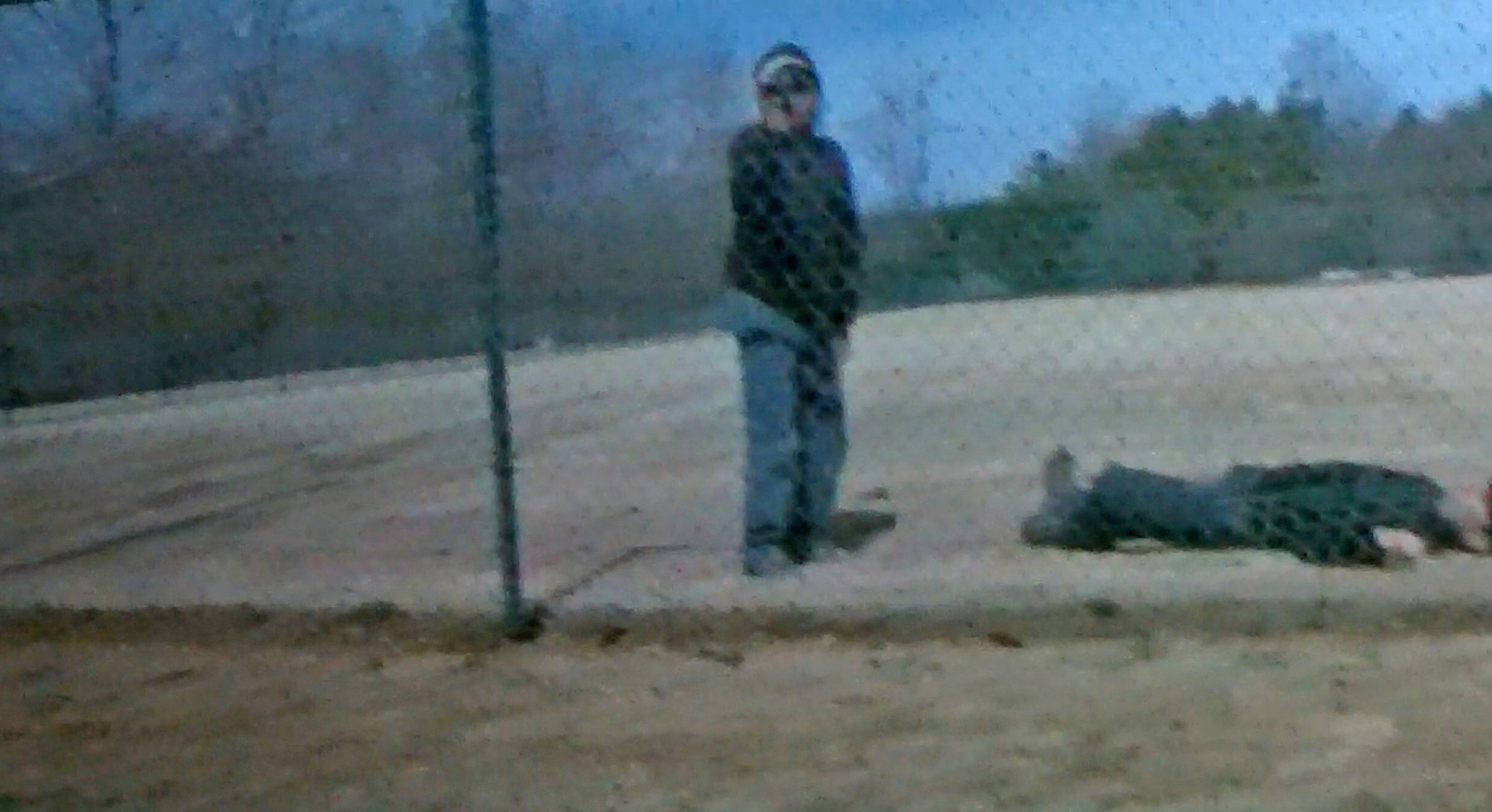 Suddenly the man pointed the gun at us.

The glee vanished as our instructor proceeded to list all of our mistakes.

The glee vanished as our instructor proceeded to list all of our mistakes.

For openers we didn’t react quickly enough to save the officer from getting killed.

We also shouldn’t have shot at the suspect while he was fleeing. He was too far away to hit and, in any event, police are only allowed to use force when someone is in immediate danger. All of those movie heroes who attempted to shoot a fleeing suspect’s legs were wrong, wrong, wrong.

The instructor then showed us where our shots had actually landed. Most of mine went into the trees or, as the instructor said, a lot of squirrels died.

I consoled myself by remembering the squirrels at home who routinely stole bird seed from our feeder and mercilessly teased my dog.

Take that, you bushy-tailed rats.

Fortunately, my partner was a better shot. Most of her laser bullets had landed near the fleeing suspect. She’d even managed to wing him on the shoulder . . . as he was surrendering.

As our shoulders drooped, the instructor apologized for forgetting to tell us that one partner should shout orders to suspects while the other focused on pulling the trigger if necessary. But we should both keep our Glocks trained.

Before starting again, my partner and I divided our roles into The Mouth (me, naturally) and The Gun (her).

Now that we knew somewhat what to expect, we successfully completed the next two sessions. They were far too realistic.

In one, we responded to reports of an adult shooter at an elementary school. We chased him into the library. My partner successfully wounded him and we took him into custody.

In the next session, a delusional woman dressed in rags threatened us with a very large knife. It seemed to take years, but I talked her into dropping the knife and surrendering.

They saved the most difficult session for last. In this scenario, we needed to stop a gunman who’d taken cover in a crack house. Unlike the other sessions, this one introduced innocent bystanders.

We entered, both of our guns raised and ready.

Beside us, a door opened. We spun around. The man was unarmed. We withheld fire. I told the man to take cover.

We turned a corner and stepped into a hallway lined with doors on both sides. A new door opened. A child ran across the hall and disappeared through another door.

We inched down the hall, around another corner. A shot rang out, the bullet ricocheting off the wall.

I shouted “Police! Drop your weapon!” at the man backed against the far wall. Instead, he pointed the gun at us. My partner fired. He dropped to the ground.

I lowered my weapon, which had grown heavy in my hand. My heart raced. My shoulders and neck ached from the tension. I was ready to turn the Glock over to the next writer.

I wasn’t quite sure how I’d translate this experience into one of my books. But I vowed that if Kimberley West ever had to handle a gun, she’d do a better job than me!

I shouted “Police! Drop your weapon!” at the man backed against the far wall. Instead, he pointed the gun at us.