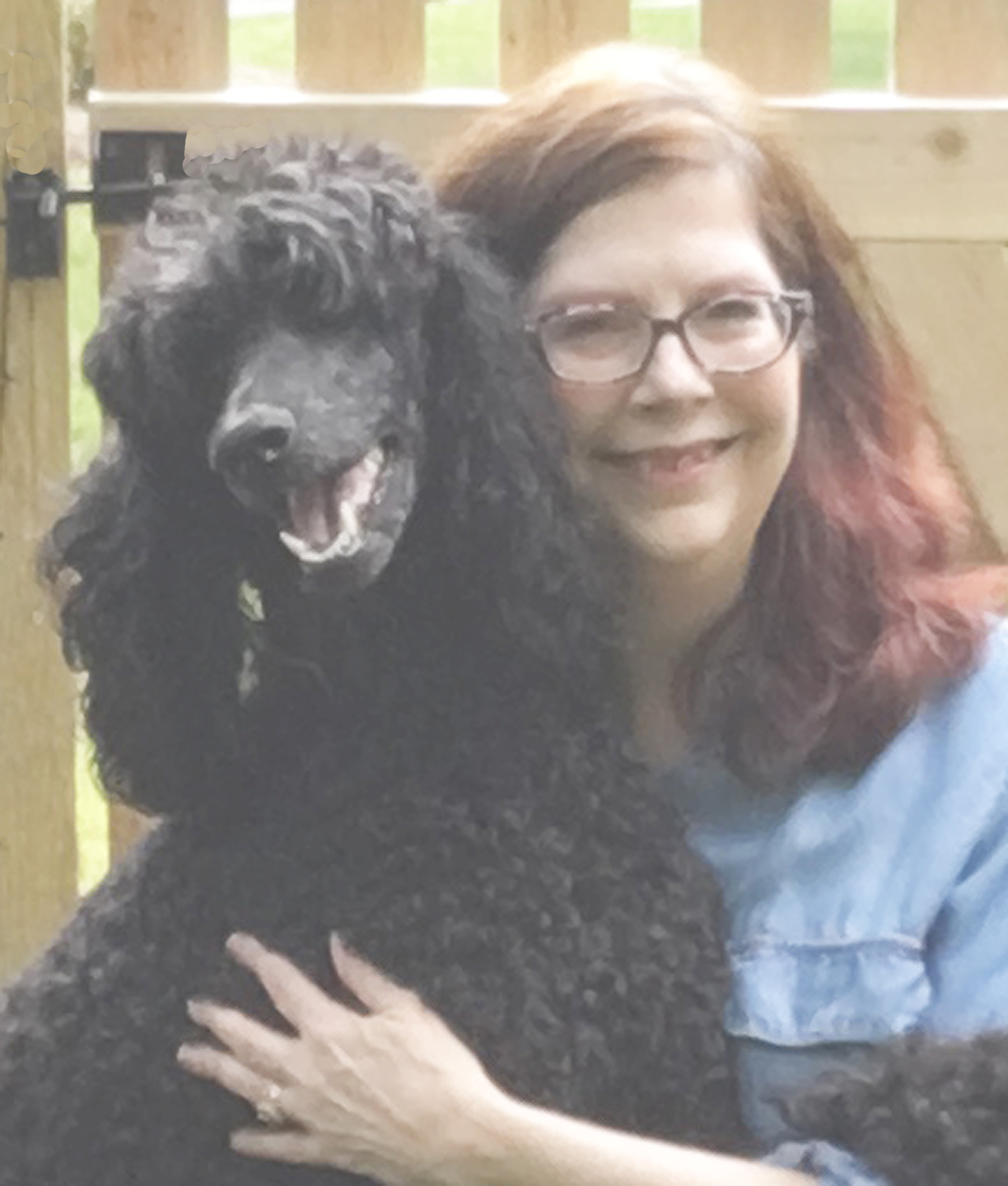 When Lynn Franklin was a child, she often accompanied her jeweler grandfather on his local buying trips. As they traipsed the grungy streets of Pittsburgh, Grandpa carried a battered briefcase filled with diamonds, emeralds, rubies and sapphires. These trips provided fertile ground for Lynn’s imagination, allowing her to search the shadows for thugs, thieves and spies.

So it came as no surprise when at the age of eight, she demanded a deerstalker hat and wrote her first mystery novel. To hone her sleuthing skills, she studied the case files of Nancy Drew, Frank and Joe Hardy and Trixie Belden.

In time, Lynn became an award-winning writer and an Accredited Jewelry Professional. But she never lost her fascination with gemstone history and lore. And so the Kimberley West Gemstone Mystery Series was born.

Lynn and her Pulitzer Prize winning husband Jon Franklin live in the Chesapeake Bay area with their standard poodle Dash. Dash works just as hard as his humans, creating comic relief for Lynn to include in her books.

How did you get the idea for the Kimberley West Gemstone Mystery series?

I’m a big fan of books that not only tell a good story, but pull you into new worlds. Everything I know about horse racing, for example, comes from mystery author Dick Francis. Beverly Connor (archeology), Robin Burcell (forensic art), Julie Moffett (computer hacking) and Elizabeth Peters (Egyptology) also incorporated their specialized knowledge into their books.

Thanks to my jeweler grandfather, I’ve long been interested in gemstone history, legend and lore. Like Kim, my main character, I tend to wax poetic whenever I discover a new gem story. People seemed surprised and intrigued by these tales.

The Kimberley West Gemstone Mysteries give me the chance to share these stories while weaving a fun whodunit.

So the gemstone stories in the books are real? There really are ants that mine garnets like you describe in The Pirate's Ruby?

(laughing) Yes, all of the gemstone stories in the books are true. The Carolina Emerald, in fact, is based on a real museum burglary that was never solved.

The human fascination with gems and gold and everything bright and shiny creates some interesting tales.

Take amethyst, for example. During the height of the Roman Empire –- a period known for its decadence –- people believed that wearing amethyst would protect them from getting drunk. After all, wine is purple and so is amethyst . . .

As I keep discovering, gemstone lore often reveals more about human psychology than the gemstones themselves.

What about Rory and Al? Are their antics real?

Absolutely. Anyone who’s lived with a dog of any breed will recognize some of Rory’s and Al’s behaviors, from finding creative ways to steal food to ecstatic running and leaping. As members of our human families, dogs contribute to much to our emotional well-being –- including providing comic relief when life grows too intense.

I wrote The Poodle Who Picked Pockets to give to as a holiday present to members of The Diamond Digest. The story highlights the relationship between Kim as a child and her grandfather, Max Hershey. Grandparents play such an important role in children’s lives and this story was intended to celebrate that.

I intentionally structured the stories similar to The Princess Bride, with Grandpa Max telling Kim a bedtime fantasy.

In Grandpa’s tale, a standard poodle named Sam and a long-haired dachshund name Tucker take control of a detective agency when the man they work for falls ill.

I styled the two dogs as the Nero Wolfe and Archie Goodwin of the canine world. The conversation between the two dogs is hilarious and, of course, only special humans can understand them.

The overwhelmingly positive response to The Poodle Who Picked Pockets — it was shortlisted for a Dog Writers of America Award! — convinced me to write more.

The Poodle Who Ran Away From Home continues the series and is even more fun than the first story.

I’m currently working on the third book in the series, The Poodle Who Sang Undercover. This should be available in early 2023.

So what's next? When can we expect another Kimberley West mystery?

I’ve just completed The Antique Diamond, a fun prequel to the Kimberley West series. In it, Kim and Rory – who is still a puppy – must uncover the person who stole a bride’s antique engagement ring. The novella is free to members of The Diamond Digest and won’t be offered for sale anywhere.

I’m working on the next Kimberley West story, but can’t predict how soon it will be released. I’m excited about the gemstone featured next, which I will eventually reveal on The Diamond Digest. Readers are going to be delighted by some little-known facts I uncovered about a well-known historical figure.

In addition to the two current series, I plan to launch a new series featuring a husband and wife amateur sleuth team. What sets Nick and Alexandria (Allie) Morie apart from the famous Nick and Nora Charles or television’s Hart to Hart is their age. Nick is 72 and a retired photographer. Allie is a 65-year-old investigative reporter who, in the first chapter, is forced into retirement.

Nick convinces Allie to join The Golden Stars, a group of senior citizens who perform variety shows. While Nick possesses a beautiful baritone voice, Allie has no talents whatsoever. But when a body is found at a show, Allie puts her investigative skills to work.

Like the Kimberley West series, the Nick and Allie series will feature realistic, likeable characters. 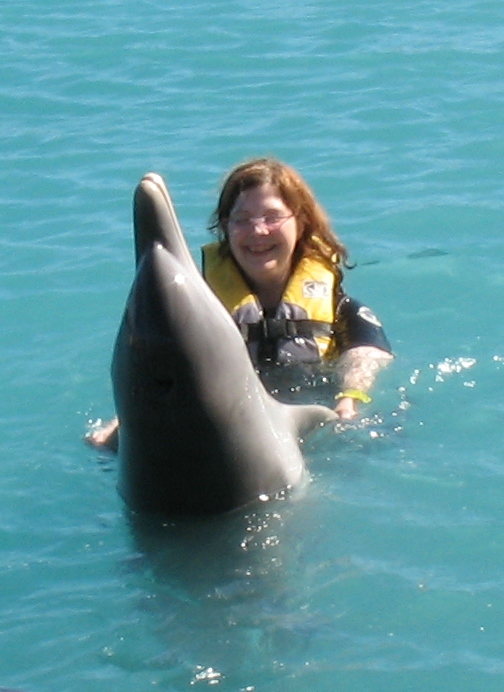 •  Lynn’s first-grade teacher predicted she would grow up to be a writer. We don’t know if this was because of Lynn’s proficiency with the English language or her propensity to scare the other children by telling ghost stories during recess.

•  Lynn’s parents begged her to consider a more practical career, one that would actually earn money.

•  In response, Lynn created a list of alternative careers: circus trick rider, rodeo barrel chaser, treasure hunter, dog trainer and pirate. Her parents shot down each one. They also dissuaded her from becoming a paleontologist (“not enough jobs”) or oceanographer (ditto).

•  Nancy Drew’s adventures — not to mention her spiffy red convertible — inspired Lynn to create the perfect career. She would become a detective who wrote mystery novels. This time she didn’t share her aspirations with anyone.

•  To hone her detecting skills, Lynn used the cover of a forested park to spy on her neighbors.

One day, when she was ten years old, she followed the smell of burning paper to find a grizzly-bear-sized man ripping a manuscript and tossing the pages into a fire. The man’s furtive head swivels convinced Lynn his actions were illegal.

Was he burning stolen FBI files, evidence of his criminal activities?

Peering from behind a tree, Lynn strained to read the mysterious document. But she was too far away.

She held her breath and creeped forward. Closer, closer . . .

The man’s head whipped around. He pinned her with dark, evil eyes.

“What are you doing here?” he growled.

Her audacious answer distracted the man long enough for her to disappear into the woods before he could capture and hold her for ransom.

•  To this day, we’re not sure Lynn’s parents would have paid a ransom.